DoppelgangersIn 1998 a 19-year-old young bride moved with her… 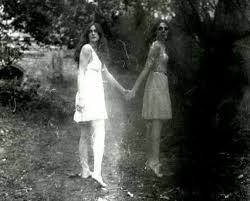 In 1998 a 19-year-old young bride moved with her husband into a new house in Seattle, Washington. The couple had just ended their honeymoon, and everything was normal, until the car pulled up to the front curb. As she walked toward the front door of her new home, she was astonished to see an image of herself coming down the front walk toward her, wearing a stylish black dress and crying. It was undeniably herself, not only did she recognize her own face, hair, and body, but there was a jolt of primal recognition when she saw this mirror image of herself. As the image approached her it vanished, leaving her feeling unsettled and nervous.

Years later, this same woman came home from a late-night party to find her husband and her best friend were having an affair. Distraught and crying, she turned around and walked out of the house, never to return. As she strode down the walk, she had a vivid flashback to the day she had arrived as a hopeful bride, and realized that she was wearing the same black dress she had witnessed on her mirror image that sunny afternoon.

A disturbing phenomenon, doppelgangers have been witnessed for hundreds of years. Meaning double walker, they are a manifestation of a person which appears to family, friends, or even to that particular person. Often called an evil twin, a doppelganger brings with it a feeling of unease but usually doesn’t actually cause mischief or trouble. Although occasionally a person will see his or her own doppelganger, more often doppelgangers appear far from the location of the actual person and are often seen from the back, hurrying away. A loved one may call out to this image and try to follow it, only to find that nobody is there. And while it may not actively cause any harm, it often precedes heartbreak, accident, or death.

Throughout history, doppelgangers have been seen as harbingers of death or misfortune. Celebrated poet John Donne saw his wife’s doppelganger twice in one evening, walking through the room carrying a dead child in her arms. Only later did Donne learn that his wife had given birth to a stillborn daughter. Likewise Abraham Lincoln famously saw a doppelganger of himself before his assassination, looking exactly the same except several shades paler, almost corpse-like. Many times a doppelganger will have the appearance, attitude, and dress of the person at the time of their misfortune, as if it is a visual premonition of exactly what that person will look like when the terrible events unfold.

Are doppelgangers ghosts or spirits? This seems unlikely, given that they are always manifestations of people who have not yet died. Some believe that they are astral projections, sent consciously or unconsciously from the minds of those who are copied. The Seattle bride, for example, may have felt such strong emotion on those two occasions, coming to and leaving her home and marriage, that somehow her mind bridged the gap and she witnessed both at the same time. Another theory is that humankind is so emotionally connected that the close friends and family of a person in danger somehow sense it, and have a vision of that person as if they could warn them of what is to come. Whatever the explanation, doppelgangers are phenomena that continue to trouble many people.

DoppelgangersIn 1998 a 19-year-old young bride moved with her…