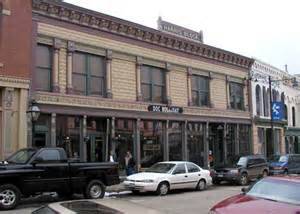 The Golden Rose hotel had many accounts of hauntings during its existence. One room in particular received much attention: even when empty, guests staying in rooms on either side would complain to management in the morning about the loud arguments coming from within it.

When gaming was re-legalized in 1991, the annex was sold and converted into a casino. It is reported that windows that were locked up the night before would be found opened in the morning. (As the windows have to be slid upwards to open, it’s somewhat hard to rationalize.) Papers would be blown all across the office, and files would be found strewn about, or left inexplicably on the floor. Sometimes files would disappear entirely, only to later show up on a desk.

It is believed that the ghost is none other than Doc Holliday paying these visits. Doc Holliday was dying of tuberculosis during the last years of his life…and he knew it. He was often moody and upset; getting into terrible fights with his on and off-again girlfriend, Big Nose Kate. Perhaps even after leaving his hard-lived life he hasn’t found the peace he was looking for.