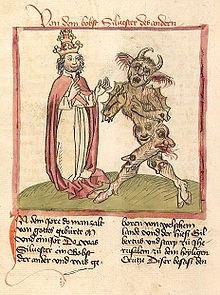 As a young man, Gerbert of Aurillac was rejected by a woman who he had feelings for. After being rejected he was approached by a woman named Meridianna. The woman promised to give him as much sex and power as he wanted, but he must be faithful to her. Gerbert eventually became powerful and rich, making his way though the church ranks. Eventually he became Pope Sylvester II, and supposedly still had a sexual relationship with Meridianna, who was a demon he had formed pact with. Meridianna told Sylvester that if he would ever hold mass in Jerusalem, he would die and go to Hell. Fearing for his life, Sylvester II confessed his sins and later died in Rome.

The story of my old icon is finally revealed

My favorite version of this story is that Sylvester gave a sermon in a church with “Jerusalem” in it’s name so the devil gouged out his eyes and gave them to some demons to play with.


Posted in Its Spook Bitch and tagged Scary Stories Ghost Shadow People Supernatural Haunted Unexplained Paranormal by cnkguy with no comments yet.