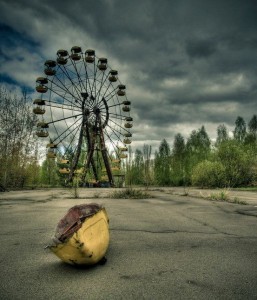 Around 25 years ago, tragedy struck the Ukraine in a town known as Pripyat. Pripyat was a town built around a nuclear reactor known as Chernobyl during the 1980′s. The town was home to many of the workers at Chernobyl and their families. However, one night in April of 1986 changed the town and everyone near it forever. The nuclear reactor suffered an accident that left Pripyat at the center of the worst nuclear accident in the history of the world. Over 300,000 people were evacuated by the Soviets, but the damage was already done. Besides the workers that were killed in the original explosion of reactor #4, hundreds more died as they tried to rescue and evacuate the town. Even more victims were claimed as hundreds of people for miles around were eventually diagnosed with cancer, due to the radiation. More victims of Chernobyl came in the form of birth defects, as children whose parents were affected by the radiation gave birth to deformed and sickly children.

Over two decades later, the town of Pripyat still sits in the same abandoned state that it was left that fateful night in 1986. A dark cloud lingers over this ghost town and memories of the tragedy will never fade.  The current population of Pripyat is zero. However, there are those who believe that this number would be much higher, should you count the ghosts that reside in this abandoned town.

For many years, people have reported ghostly shadows and figures, that some say are the spirits of those who lost their lives in the tragedy.  Some have even reported being touched or pushed.  The town is located in a restricted zone, requiring anyone who visits to pass through a few military checkpoints. This is mostly due to the dangers that the radioactive town could still pose to visitors even today. This doesn’t make for ideal ghost hunting conditions. However, this hasn’t stopped curious people from visiting the area and experiencing the ghosts of Chernobyl first hand. The most well known of these visits would have to be that of the Destination Truth team, who became the first ever allowed to spend an entire night inside Chernobyl. And of course, the paranormal experiences ensued.