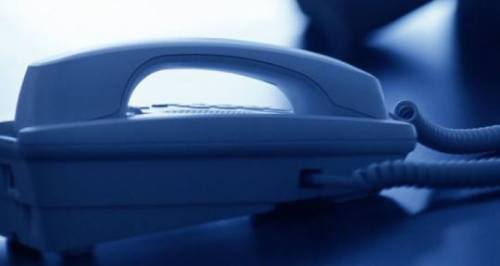 Can the dead call the living?

Though it seems impossible, many people believe they’ve received calls from loved ones who have passed on.

“My fiancé passed away suddenly on June 7, 2014 from a massive pulmonary embolism. I woke at 5 a.m. to find him sweating and having difficulty breathing. He was rushed to the local hospital but passed within two hours.

On July 4th of this month, I was home alone researching BMWs online since he has driven them for 25 years and I now have this desire to buy one. I was trying to decide between the 328 and 335 when my phone rang. I looked at the caller ID and it said it was me calling from my house phone…but I was answering my house phone!

I said hello and heard only loud static on the other end. I got chills and said George’s name and then heard four or five busy signals. The line then cut off. I went online to check my call log and sure enough it said my house phone called my house phone at 3:34PM! I’m thinking he wants me to buy the 335 model. 🙂

And then on July 14 at 5:52 p.m., my phone rang and the caller ID listed an odd incomplete string of numbers that I assumed was some solicitor so I let it go to voice mail. As I listened, it was that same loud static and then a busy signal before cutting off. I’m not sure if there’s any significance to that date or time. I feel in my heart it was George checking in.”

“On October 21, 1988, just after 7 in the morning, I was awakened when my phone rang. My dad said ‘Goodbye ___ (he used his personal and very uncommon nickname for me). See you later. Love you kid.’ And then hung up. This was not that unusual. My dad often mis-dialed or called one of us meaning to call somebody else. I was in my second year of college at the time, but my dad was in his mid-seventies, almost thirty years older than my mom. He was in the early stages of Alzheimer’s, too, so we all kind of expected things like this to happen.

Since I was up, I turned on Good Morning America and ate some cereal. About an hour later when I was showered and dressing for my first class, one of my brothers called informing me that our dad had passed. He had collapsed with a brain aneurysm the night before and was rushed to the hospital where he never woke from the coma. Then, around 7 a.m., his heart had given out. My brother said he had repeatedly tried to call me throughout the night and that morning but my number had been busy – like I was talking all night or my phone had been knocked off the hook. This was before cell phones and computers were common, when all that most people had was a single land line.

That’s all I have. My dad called to say goodbye when no one else could seem to get through at all. I didn’t tell my brother or anyone else in the family about the call. I was afraid it would have caused a lot of anger and distrust. Better to write about it and share it with people who are interested in the paranormal. My family is definitely not. Nor was I, until that day.”

Have the dead called you?