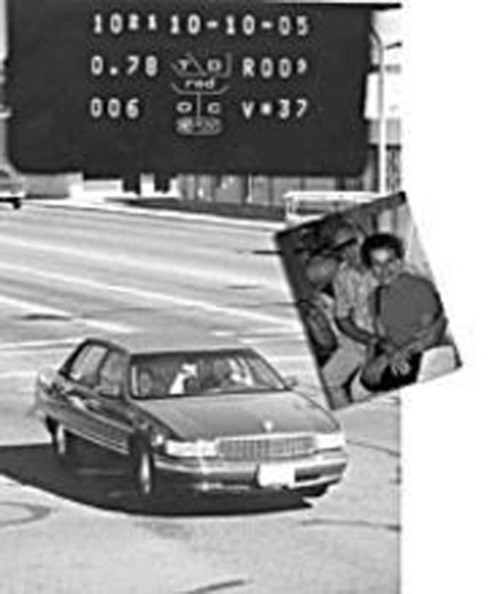 It started simply enough. On October 10, 2005, a car ran through a red light and was photographed doing so by the camera system in place. The Mesa Police Department then issued a ticket including the photograph of the car running the red light by mail to the offender, James Hamburg. When the Hamburg family received the ticket, the problems began.

You see, James Hamburg had died five years earlier. And it got more complicated from there.

The photo appears to show both James Hamburg and his wife, Lorraine, in the car that is running the light. But 80-year-old Lorraine was at home recovering from heart surgery, and her son Steven’s wife had been driving the car in question on October 10. So the family knew where James was, they knew where Lorraine was, and they knew who had the car… so the picture was technically impossible.

After Steven Hamburg finally convinced the police that his father was indeed dead, and the ticket was dismissed, the police dug further into the matter. One thought was that maybe it was an old photo; but one of the buildings in the background had been built in the past year. It was also found that archived tickets were destroyed after three years, so even if the strange ticket was old it would still have dated from two years after James Hamburg’s death!

The police basically came to the conclusion that someone must have taken the car for a drive, and they must have taken Lorraine Hamburg with them — in short, the family must be lying. The Hamburgs disagree. And that’s where the matter stands.