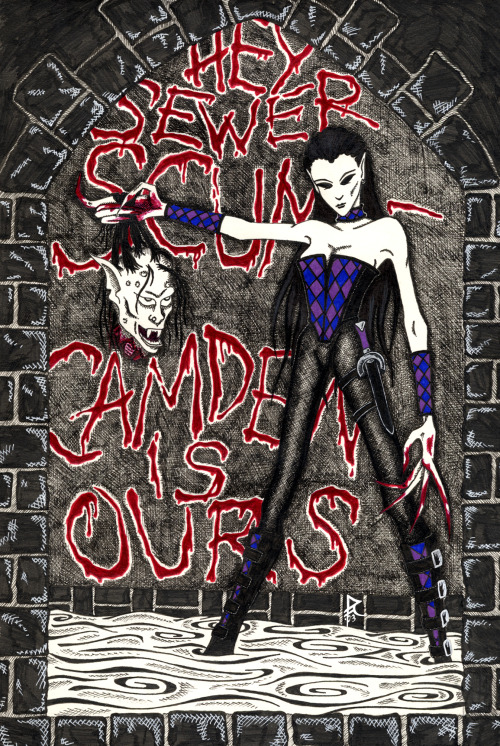 A monster of a different sort. A Sluagh hunter who has rid her territory of a vermin predator.

Noah looked at the wet glistening letters on the wall and felt the first squirmings of fear in his belly, like tadpoles and piranhas.

Hesitantly, stupidly, he reached out a finger to touch it.  It was clammy and sticky and red.  He stared at the blood on his fingertips wondering who it had belonged to. One of his kind? But how to tell?  He gave it a cursatory sniff, feeling self conscious.  It smelt of old ironware, cobwebs and copper kettles and strangeness – which in turn smelt a lot like his grandmother’s kitchen back in Cornwall.

Shite and onions, how was he supposed to know?  Melody – he should tell Melody – she’s know what to do.  Noah wiped the blood off on his coat and spared one last look at the dripping words on the dark Victorian brickwork.

CAMDEN IS OURS, the writing proclaimed.

Noah shuddered.  For the love of anyone – they lived in a sewer under Chalk Farm.  It was secret, away from the noise of the city above, hidden in the warm and the dark and the shit.  Who the hell else would come down here?

She crouched, resting lightly on her long toes, listening as the boy splashed his clumsy way north from her, back towards the old warren.  A lopsided smile lit her corpse-white face.  Looked like he’d found her message then.  Daintily she reached up, her thin spider-like fingers caressing the brickwork, looking for purchase.  She found the holds she needed in the crumbling mortar and skittered up the wall and along the tunnel ceiling like a giant insect.  Her pace was swift but leisurely.  After all, he wasn’t a difficult quarry to track, and she wanted to give him time to spread the fear amongst his happy little band of Harry Housen rejects.

She wrinkled her nose. Stupids. Stinking little stupids. They made her skin crawl and her head ache.  They were all wrong.  With their pathetic games of hide and seek, of lurking in the dark hoping to glean secrets and sparklies.  Talking to their little friends – were they mad? And to top it all they were ugly….  She grinned at that thought, displaying a mouthful of small pointed teeth.  Many might say the same of her.  But then again, amongst her kind she was considered rather beautiful as far as these things went – after all, everything was relative.  Of course she wouldn’t dream of turning up to Court as she was, but this was a hunt, not a social gathering.  Her ears twitched slightly.  The boy was on the move again.

Noah hurried along the gantry at the edge of the sewer pipe.  The flow was at low ebb, but that didn’t mean he wanted to walk in it.  Melody and the others said he’d get used to it, said that they belonged down here.  He shook his head.  If they wanted to play let’s pretend to be monsters in the sewers, fine.  It still smelt like shit to him.

He froze and instinctively pulled at the shadows, wrapping them around himself like cloak. (He never got tired of that trick, pity he couldn’t see it, it must look so cool!)  Still as marble he listened, wondering how long it would take his muscles to cramp.  Nothing.  Just the lazy run of sewage and the occasional scratching of rats.  He let go of the shadows, trying to tell himself it was fine.  Melody was right.  It was nothing.  A joke perhaps.  Or some graffiti left over from some long dead dispute.  It hadn’t been blood it had been paint, rotten and flaking on his fingertips. But if that was true, why then did the hairs on the back of his neck bristle up like icy needles?

The archway keystone stuck out proud from the rest of the wall.  A useless detail to anyone else, but to her it was the means to perch.  Long limbs balancing her, spiky digits stuck fast in the damp masonry, her stiletto gripped gently in her teeth.  Like any good hunter, she did not hunt – she waited.  Patient as the stone to which she clung.  She would only have one chance with the boy, if she missed he would likely disappear or call on his little friends.

Her eyes shone obsidian in the dark.  He could turn into a fish and swim away for all she cared – the second rate little gollum died tonight.

When it happened, it was purest poetry in motion.

She dropped in front of Noah like a leather-clad spring, her knife disappearing from her mouth and reappearing in her hand in time to score a post-mortem wound down his front from chest to groin. As her toes touched the muddy ground she was moving again, weaving between his legs as he staggered, supple and sinuous enough to shame a snake.  Her knife kissed his spine as she erupted behind him, slamming her blade between two of the vertebrae in his dead-fish skinned neck.

The corpse boy wheezed as she slapped the handle of her knife left then right, severing his windpipe, trachea and jugular.  He crumpled, his body doing nothing but start the slow process of putrification.

Jennet retrieved her blade and used it to cut the last stringy bits of cartilage and muscle, severing the head of the young Nosferatu from his body.  She wiped her knife clean on one leg of her trousers and sheathed it at her waist.  She pursed her bruise dark lips for a moment before smiling her sharp little smile.  Jennet held the rotting skull like an ink pot and used her fingers as a brush to daub the nearest wall.  No more veiled threats.  The Sluagh’s eyes flashed like polished jet.  Surely even something as stupid as those ugly Vampires would understand this.