Professional ghost hunter Mark Vernon has treated us to another of his paranormal captures.

Taken on his latest paranormal investigation; The Famous Black Monk of Pontefract Poltergeist case. This stunning image was captured on Mark’s fourth visit to the location

The 19 Creepiest and Weirdest Things Children Have Actually Said1. This boy who probably needs an…

The 19 Creepiest and Weirdest Things Children Have Actually Said1. This boy who probably needs an…

The 19 Creepiest and Weirdest Things Children Have Actually Said

1. This boy who probably needs an exorcism:
I work at a summer camp and one day I was playing with this kid who was jumping off of things and onto me. I said, “Hey, be careful. If you kill me I can’t play with you anymore.” He looked me dead in the eyes and said, “No, but I can play with you.”

2. The scariest moment of this parent’s life:
I woke up to find my 3-year-old son lying in bed next to me. I asked how he got in my bed, and he said he came to protect me from “the light eyes” that were standing over me while I was sleeping.

3. This little girl who deserves her own horror movie:
I was babysitting a family friend’s kid, and it was just the two of us in the home. She looked around and whispered to me, “We’re not alone in this house.”

4. This paranormal activity:
My mother was babysitting my daughter while I was at a doctor’s appointment and said, “Oh no, Grandma. Mama’s not coming any more today. She was in a bad, bad accident. She can’t come get us.” I had indeed been in an accident that almost killed me at that exact time. None of my family had yet been notified.

5. This real-life Poltergeist:
I was babysitting and didn’t know how to turn off the TV, so it was just static. My 4-year-old cousin stared into the static and said, “I see the monster”.

6. This insane Freaky Friday exchange:
My sister, Hailey, was born exactly two months after our great-grandmother died. One day Hailey woke up and informed us it was her 95th birthday. When we tried to reason with her she started crying, saying that her real name was Irene (my granny’s name), not Hailey. This lasted all day, and the next day she didn’t remember anything.

7. This frightening premonition:
On our way to the theme park, my little cousin once told me, “You’re going to die today.”

8. This child who belongs in The Sixth Sense:
My little cousin said her imaginary friend “Chucky” told her to kill her dad. It turns out they used to have a pool in their backyard that was covered up after the last owner committed suicide. His name was Chuy, but my little cousin couldn’t pronounce it so she called him Chucky.

9. The scariest future doctor in the world:
We were on a boat on vacation and my 4-year-old cousin got really close to me and whispered in my ear, “I want to be a doctor so I can watch children die.”

10. This unnerving question:
In the middle of the night, my little sister turned to me and said, “Do you hear them talking?” But it was dead silent…

11. This story that belongs in a Stephen King novel:
My son told me about a “dead woman with blue skin, no hair, and black eyes” who supposedly lived in our old apartment. He said he watched her follow us outside and try to get in our car but there was no room so she stood outside and watched us leave while waving goodbye.

12. This playful game gone awry:
I was babysitting a 2-year-old boy. We were playing with blocks and he was laughing, when he suddenly turned to me and said, “I’m gonna shoot your head off.” We played hide and seek that night and I was terrified of him finding me.

13. This devilish boy:
My 3-year-old son and I were walking in a crowded mall. He likes to say “hi” to everyone. He started “hi,” “hi,” “hi,” as people walked by, but out of nowhere he pointed at a man and said, “You’re going to die,” and then he continued with his hellos. Super creepy.

14. This ghostly encounter:
I’m a nanny for a toddler who’s still learning to talk. As we walked through our local cemetery, which is normal in our neighborhood, she pointed at the area above the graves, saying, “People! Look, people!” over and over again.

15. This haunting feeling:
When I was really little I pointed to a tree outside my house and said to my family, “That tree is going to die.” No one thought anything of it, but the next morning it randomly fell over and crushed my grandpa’s car.

16. The scariest song this mom has ever heard:
My 3-year-old son was softly singing while he was coloring. I stopped to listen, but I had never heard the song before. I asked where he learned it, and he said, “The lady in my bedroom sang it to me.”

17. NOPE:
My sister described her ‘imaginary’ friend, saying, “He sits on my bed and waits for his mom. He’s not allowed to go home by himself because of his arm.” I asked what happened to his arm, and she said, “His mom ran him over when he was drawing with chalk. That’s why he’s always crying, because he doesn’t like being dead.”

18. This spooky occurrence:
When I was about 4, my mom found me in the bathroom with all my Barbies, making them float facedown in the bath. When she asked what I was doing, I replied, “The man in the wardrobe told me if I didn’t do it, it would be my turn to swim facedown.”

19. And this frightening conclusion:
I work with kids on the autism spectrum. One of them said, “They can see us, but we can’t see them.”

Bedlam (Our Lady of Bethlem): Goddess of madness, foresight, and…

Bedlam (Our Lady of Bethlem): Goddess of madness, foresight, and… 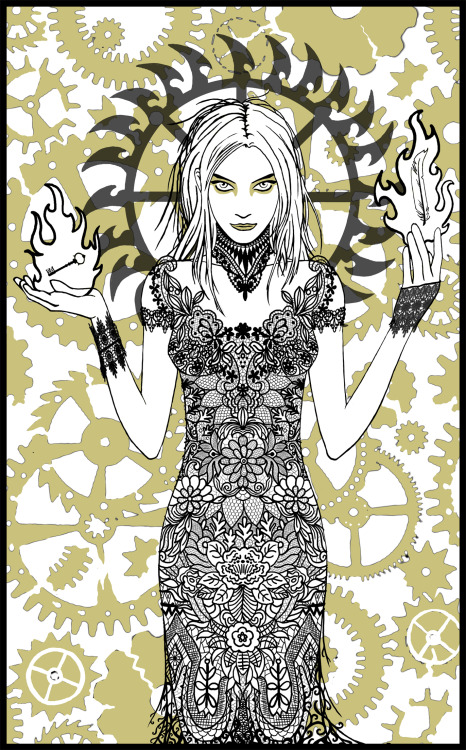 Bedlam (Our Lady of Bethlem): Goddess of madness, foresight, and chaos. Neutral often, but frequently beneficent to those in need. The lost, insane, or hopeless all have an equal chance: the prayers and pleas of the suicidal teenager will be answered as will those of the serial killer. Just answered in a very different way.

Blessings or Sanctuary may be granted. In the case of Sanctuary, some are housed in the wards above and given the freedom of the day rooms, the music rooms, the solarium, the kitchens, sheds, and gardens. They may read or exercise, paint or cook, work or aid with chores. For them there is quietude, a peaceable community and safety within Bethlem’s walls.

Then there are the others. Those housed in the wards below. Those whose transgressions have been unforgivable and many. Those who cry crocodile tears over sins they will gladly commit again. Those who hurt and defile innocents…

They and their kind are sent to the lower wards. They are not permitted the light of day. But even if they were, it wouldn’t matter.

It’s very dark down there. The shadows hiss and skitter, all teeth and obsidian claws, gnawing at the inmates on moonless nights, deep enough to find bone… But even that’s not enough.

Because once you’re in the lower wards, it doesn’t matter who you know or what you’ve done. Now not even Death is your friend. Because you’re here forever.

As if you ever could.

And it’s too late.

<p>do you think haunting is requited?</p>

<p>do you think haunting is requited?</p>

In the right stories, the house and the haunting are the same. It’s requited in the same way self-love is requited. Or perhaps more accurately, self-hate 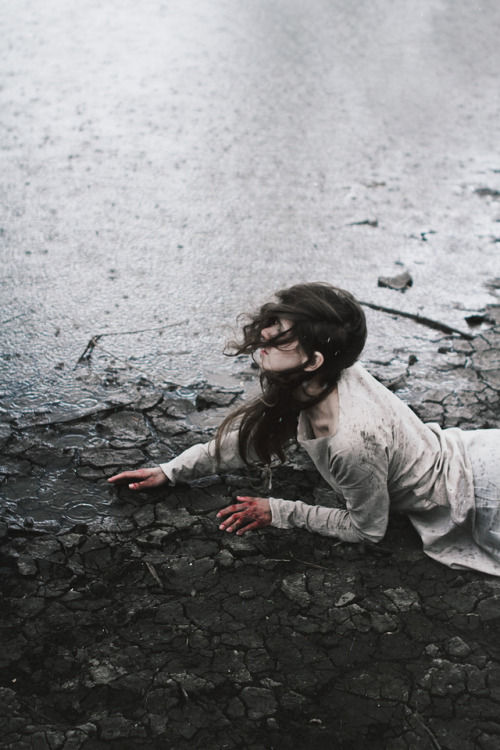 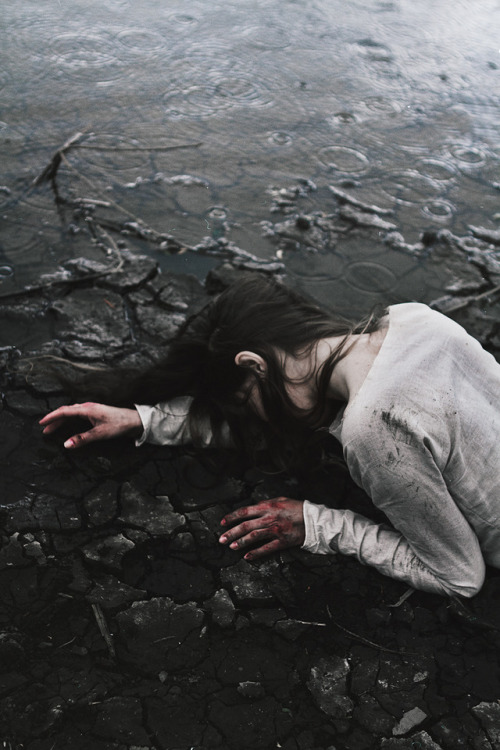 They whispered something to the wind… Their evil words, like weeds have taken roots.
They threw stones at her in the wake,as if trying to find the bottom in the abyss of her despair.
The cold wind knocked her down, blackened the dress with lumps of mud, mind – with curses.
Swamp slowed her steps and lured into the arms… And inaudible lullabies of fishes lulled the exile.
The breath of the forgotten rivers was joined by her whisper, full of bitter fatigue. The wind has forgotten her name, but tore the linen dress – gray cloth trembling of his roar.