“About five years ago, I got down on my knees and asked God to show me he’s real. Really strange things began to happen around my home shortly thereafter.

My mom said that her ring would randomly fall off in the middle of the night, and every morning we would find it underneath the bed, right in the middle. It always ended up in the same place. There’s no way it could roll under there and stop in the same exact spot every night.

I also began to feel like someone was watching me. I started having paralytic dreams, dreams about murder every night, same theme but different scenario. I was even having dreams about the apocalypse. One night, I had a dream that something took over my body and I couldn’t move. Whatever had ahold of me took me over to my mom’s full-length mirror in her bedroom and smashed my forehead against it. In my dream, I kept asking it “what do you want?” It responded by forcing me to look in the mirror, and it kept saying “I want to kill” you over and over again.

The boy with blue eyes

I was also having dreams that seemed very real. I dreamed about a boy who looked like he was in his early twenties. In the first dream, he was in a cave-like setting. He was wearing a blue plaid shirt and his eyes were so brightly blue that when he turned his head to the side, it looked the same way a flashlight would if you turned it to the side. The light in his eyes were like a beam of light. In that dream, I was very attracted to him. I kept trying to grab onto him and hug him, but he kept grabbing my arms gently like he was trying to tell me something. It was if he was trying to hold me still, look at me in the face, and talk to me. I then woke up.

I had another dream. I think it was about the same boy. I dreamed that he walked me through a town, and in this town, there was a road where a bunch of souls were walking. I could see my grandma’s face among the souls. I remember running up to her and trying to get her attention, but he ran after me, grabbed my hand, and said “she can’t hear you.”

I began researching means of spirit communication to find out what was going on. I learned about EVPs, or electronic voice phenomenon. They say you can hear spirits on audio recordings that you can’t hear with natural hearing. So I thought I’d give it a try. I shut off all the TVs, all the radios, and anything else in my house that made noise. I hit record, I spoke into the recorder, and when I played it back, I clearly heard a male voice. It was as if he put his mouth right up to the microphone and said “I’m sorry Amber.”

This really piqued my interest. I continued doing EVPs for several months and from what I understood, I was communicating with spirits. I actually got really good at it. One day I was in my kitchen doing EVPs when I heard something banding on my window. When I looked up, I saw something big and black outside. It appeared to have a cape and long black fingernails, like an animal. It was there for about five seconds and then it disappeared.

One night I was laying in my parents’ room watching TV. All of the sudden I could not move and could not speak. I could feel my body becoming lighter as I stared at the TV. I had trouble keeping my eyes open. I could feel my head sinking back and my body becoming lighter. I honestly believe that I was being levitated. I remember worrying I would land on my dog if I fell. I was trying to talk in my head but I could barely think. I finally mustered enough strength and felt my body slowly sinking back into bed. As I sank, I saw two green arms come out from beside my body. I could tell they weren’t human because they had a green tint and they were a bit more muscular than a human’s. The forearms were longer and they had long, black fingernails. They waved around in front of my face as if they were saying “look I’m here!” Then one of the hands reached down and tapped me on the forehead and that’s when I could move again. I know this sounds strange, but I wasn’t afraid. I just continued watching TV as if nothing happened.

All kinds of other strange things happened. Pictures fell off the walls. I would sometimes smell sulfur or the stench of something rotting. It was a very strong smell. My parents also witnessed some of these experiences. When I tell my story, people ask if I was on drugs or if I’m schizophrenic. When these things were happening, I went to two different psychologists who both deemed me not only mentally fit, but very self-aware as well. After seeing all these things, I came to the realization that God is real and that there is something bigger out there.

So I began focusing all my attention on God, and I now talk to him no matter what I’m doing or where I’m at. I can be in the kitchen cooking, and I’ll talk to him. I can be in the shower, and I’ll talk to him. Everything I do in my waking life, I include God in it. Ever since I stopped doing spirit communication and began a relationship with him, not only did all the paranormal stop, but my life has gotten 100% better compared to what it was before. I developed such a strong love for him that I try to do everything in my power to not do anything to upset him. I don’t drink, or do drugs, and I haven’t been in any kind of relationship since. Before it always seemed like the devil was attacking me. It was always one bad thing after another. I haven’t had one single bad thing happened to me since. As a matter of fact, my mom had a stroke last year. Instead of panicking I went directly to God and asked him to help her. She is now walking and talking again as if nothing ever happened. Whenever I am in pain or suffering, all I have to do is ask God to make the pain stop and it stops immediately.

I now have a relationship with the spirit world that I never dreamed I could ever have. I now make it in my mission to reveal to as many people as I can that there is something bigger out there. I am so lucky and blessed to have the experiences that I did. I want to teach others how to build a relationship with God. That is my dream and I hope that one day it can come true.”

The post Reader Submission: The Holy Spirit first appeared on Ghosts and Ghouls.

*me @ the demon under my bed* scoot over i wanna cuddle

*me @ the shadows in the corner* come. I require hugs.

*me @ the monster in the closet*

Time for a bedtime story

*me @ the spooky that sits outside my window* do you wanna come in and have tea, it must be cold out there.

Good morning folks! I’m finished formatting and editing my new #book, The #Folklore & #Haunted Locations Guide: #Michigan!! But before I continue I’m going to try some new formatting which I think will look even better!! That being said though, where did the #weekend go?? 👻🤔

ex0skeletal-undead: Ghosts by Preto Pasin This artist on…

ex0skeletal-undead: Ghosts by Preto Pasin This artist on… 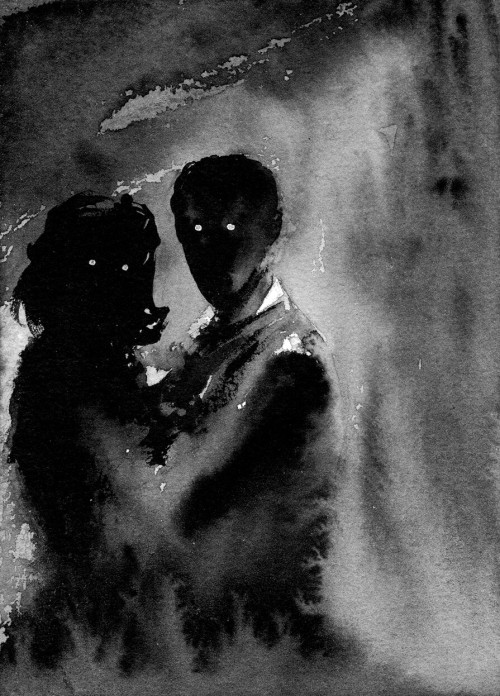