I just posted my latest #spooky video to #Reddit about the Top 19 Most #Haunted #Hotels & Inns in #NewYork!!

I don’t have conversations for you but I do have a necromantic short story that is (partly) very true….

I first came across the word in an old Dungeons & Dragons manual belonging to my brother.

I was fifteen and had been taught some Latin at school – I was terrible at it, but not so terrible I couldn’t work out the word meant magic that dealt with the dead.  I’d studied Classics and the Odyssey too, but my teacher never mentioned all that business with the sword and the trench of blood and hungry souls was necromancy that Odysseus was up to. Perhaps the Greeks viewed such things differently?

Nowadays, after all the zombie films and the fantasy games, necromancers are viewed as evil beings who steal life and raise armies of the putrefied dead to wreak havoc upon the living.  But none of that’s true.  Necromancy (necro/mancy) is foretelling via the dead, just as oneiromancy is foretelling via dreams or cartomancy is prediction via cards.  It’s nothing more than asking a ghost for advice.

WWJD? is essentially necromancy (although that’s not a very popular opinion to bandy about in the Christian community.)

Amidst the horrified bellows from hysterics who claim using a Spirit Board will summon the Devil, or the madder practitioners of magic who say you need sage and bones and rue, tobacco and grave dirt, or the players of online games who think all Necromancers are lingerie-clad ladies in hooded cloaks with glowing eyes and flashy jewellery…  Even with all that weight of noise and opinion, what no one tells you, is that it’s easy.  As easy as falling off a log (easier in fact, since fewer people nowadays have half a tree to hand.)

You need a piece of paper with the alphabet written out on it, and a plain silver ring.  A coin will do, or a shot glass or any other number of small trinkets – but a silver ring is best.  Lastly you need the sort of determination that burns hot and cold and sharp.  You place the ring on the paper, you place your two first fingers of each hand lightly on the ring.  You call aloud the name of the ghost you wish to speak with: keep calling within your mind, fiercely and strongly, whilst at the same time projecting thorns of torment towards any other spirit who might dare to approach uninvited.  Concentrate – concentrate – call, defend, and project…

It will take a little time; indeed if you don’t start to feel your brain has melted to bloody porridge and is sure to run from your nose at any moment then you probably aren’t doing it right.

But when they answer: when the ring begins to move, first hesitantly and then with greater surety, every pain is worth it.  The more you talk to your ghost, the easier it becomes for both of you until it is no more arduous than picking up a telephone and dialing a familiar number.

Another thing no one tells you is that it’s heady and it’s beautiful.  It’s shooting stars, falling in love, winning millions, caressing flowers, doing drugs, having a child, working your perfect job…

And, like all those beautiful things, it will kill you in the end.

I don’t mean that to be a dire warning, it’s just a fact.  After all, even air is carcinogenic: our bodies are all matches and we’re on a slow burn.  Everything kills you, given enough time.

Everything in this world comes with a price – even love – especially love – and as it goes falling in love with a ghost is one of the pricier things one could chose to do.

But that’s not right, is it?  No one chooses whom they love – it just happens.

It’s bittersweet and unexpected, it’s painful and wondrous and… I wonder if that was why it was sanctioned against, in the Bible and by the Church?  Perhaps they were trying to warn us.

You see, all Necromancers fall in love with ghosts in the end.

They begin as names, these spirits we summon and demand information of.  They are lonely and often bored, they hang about us like stray cats, twining round our ankles and begging for any small scraps of attention.  But the more we speak to them, the more they fill out.  They greet us when we call like a pet to its master; they are companionable and diverting and when we tire, just like a pet they may be sent away at a moment’s notice…  But time turns and things change.  The ghosts have ceased to be empty names and they have become far more than pets: they are real people.  People who lived and loved, who experienced laughter and pain as we do.  People with knowledge and experience and lives now left behind.  And you will love them because they are wise and funny and tragic, because they are alone and their time is past and there is nothing you can do to ease their regrets save commiserate with an aching heart.

I suppose I ought to tell you about my ghost; he is a gentleman who values his privacy, so I shall try to be circumspect for his sake.  He is not so very old as these things go.  He was born in Georgia in the Confederate Southern States of America in August of 1851 in the midst of a summer storm; the thunder and the lightning of that nativity following him all his life.  He trained in a respectable profession and had strong hopes for a career, property, a wife and family.  Instead he got pulmonary tuberculosis, and his life spiraled in quite a different direction.

He travelled out West, and, as happened to a lot of young men, he found a measure of silver and fast-living – not to mention bullets, drama and notoriety.  There are a lot of stories told about him – most of them are false.  (He finds the one about the stagecoach hold-up particularly hurtful.)  He’s proud and bone-headed with a startlingly wry sense of humour.  He’s thin and drawn; his hair is light, his fingers agile and his eyes the colour of iolite and sapphires.  He calls me darlin’ when he’s in a good mood and girl when he’s surly; his voice sounding like bourbon and cigarettes, like poker chips and heavy dog-roses.  He dresses fastidiously; he has always taken care with his appearance.  He coughs and when it’s very bad it sounds like someone trying to retch up gravel; neither of us know how his affliction has managed to stalk him beyond the grave.

My ghost died in 1887, cold and alone in a hotel room in Colorado.

Love is stronger than death, I know that for a fact.  But there’s still a price.

I have always looked younger than I am and have always been spry and slim without the benefit of exercise… Until now.  My ghost died when he was thirty-six, and now for me that birthday has gone – and all those frozen years have begun to thaw through me.  Six months ago I could pass for twenty-five, now I look just the right side of dead.  My skin has paled to a white-ish grey the colour of mushrooms, my face clings gauntly to the bones of my cheeks and jaw. My hair is brittle and my eyes red-rimmed and deep-shadowed.  My strength has gone and my breath no longer sits easy in my chest.

He warned me, my ghost, when he knew; his exasperation and fondness for me had twisted together into something deeper and more profound by far. He told me never to see him again, to let him fade into Oblivion as I should.  I refused of course – I can be quite as bone-headed as he when the mood takes me.  He tried to leave, sacrificing himself because I could not, but I summoned him back and shackled him there with will and words.  He cursed me roundly (he swears beautifully, putting as much art into profanity as others will into poetry) but when he’d caught his breath he sighed and said maybe it wouldn’t have made any difference.  The devil in his lungs had long and bloody fingers, he’d said, it was always looking to latch its claws into someone else.  I unfettered him once I had his oath he wouldn’t leave me: his honour binds him tighter than a gold wedding-band ever could. He called me girl and goddamn impossible and later sorceress and my darlin’ as he kissed me.

In the silvered glass, my eyes sheen like sapphires and iolite.

requiem-on-water: The rope by Natalia Drepina

requiem-on-water: The rope by Natalia Drepina 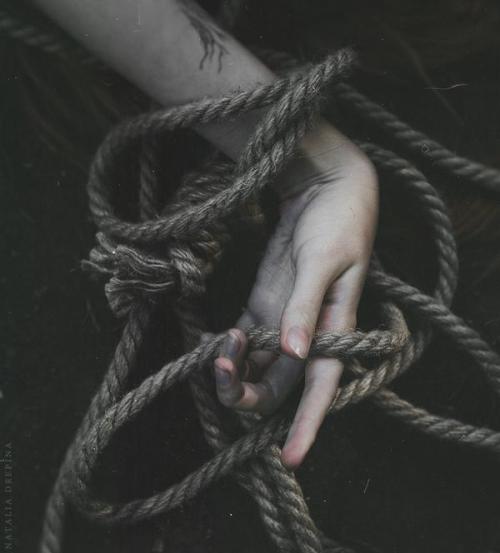