Very sorry to hear about your father. May he Rest In Peace. You are a lovely, smart beautiful lady and your father is very proud of you. Take care please 💕🌸

Very sorry to hear about your father. May he Rest In Peace. You are a lovely, smart beautiful lady and your father is very proud of you. Take care please 💕🌸

The Legend of El Chupacabra

El chupacabra, or just chupacabra, is a legendary cryptozoology creature that has been haunting various parts of the globe since an initial sighting in March 1995. The term “chupacabra” is derived from Spanish, with chupar meaning “to suck” and cabra meaning “goat.” The creature gained this dark, mystical name from the initial reports from Puerto Rico in 1995. In March and August 1995, attacks on more than 150 farm animals left officials dumbfounded.

Eyewitness accounts, published in local newspapers, spoke of a creature with a “reptilian body, oval head, bulging red eyes, fanged teeth and long, darting tongue.” The farm animals in Puerto Rico were found to be drained of blood with puncture wounds in the neck. No meat was taken from the animals’ bodies.
The situation in Puerto Rico reached such a fever pitch that Mayor Jose Soto recruited volunteers to hunt the creature weekly for nearly a year, with no success. It’s important at this point to make a distinction. When chupacabras are reported, they usually fall into one of two categories.

First, and most common to the Puerto Rico incidents, is a chupacabra that is reptile-like in nature with leathery greenish-gray skin and spines running down the spine of the back. The monster can be approximately three to four feet tall and is a bipedal – standing and hopping like a kangaroo. The second, increasingly common version of the chupacabra is more like a strange breed of wild dog or coyote.

This version lacks the hair of a dog, but features the pronounced spinal ridge or “spikes” similar to the reptilian chupacabra. The four-legged, dog-like chupacabra is also known for some fearsome fangs and claws used for training animal’s blood. The “mark” of the chupacabra on the victims is typically one to three holes, and in the shape of an upside-down triangle when three holes are apparent.

While the chupacabra or “goat sucker” seems to be a recent cryptozoology finding, the Mayans may have encountered the creature many years ago. The Chupacabra has inspired many works of art in modern culture, including the 2013 film, Chupacabra vs. the Alamo.

The Chupacabra has inspired many works of art in modern culture, including the 2013 film, Chupacabra vs. the Alamo. In Mayan mythology, Camazotz was known as the death bat or vampire bat. Stories reveal a creature with a bat or lizard-like face, two arms and the ability to turn into a statue during the day. The creature’s sharp snout even lends itself as a device that could suck blood from victims.

Even more findings identify terms like “goat sucker” found in Mayan literature as early as 1400 B.C. At Chupamacabre, we love the chupacabra because it’s just a bit different than other creatures of lore. It captures our imagination in new ways. The chupa has been “captured” in various sightings since 1995, and later tested by biologists. Tests often identify the creatures as mammals with parasitic manges of various types, but can never account for dead or victimized farm animals and livestock in the area.

Unlike the Loch Ness Monster and Bigfoot, Chupacabras are “seemingly” found, seen, captured, and still mystify and dumbfound us all. We hope you love the whimsical nature of this cryptobeast as much as we do. Since those initial sightings in Puerto Rico, chupacabras have gained worldwide appeal and in some case, worldwide sightings. Nearest and dearest to our hearts are sightings in North America, including a rash of sightings recently in Texas and some in Florida. Russia, China, Thailand, the Philippines, and other countries report chupacabra-like sightings or killings of livestock. 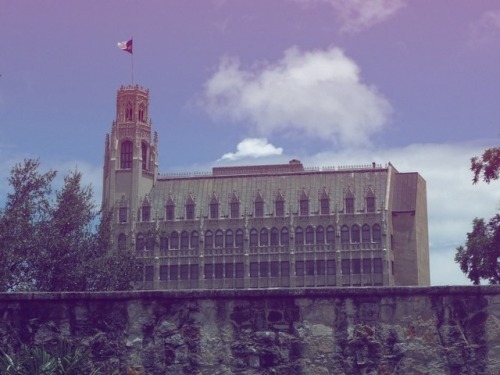 With its storied history of bloody battles and lore, the Alamo City lives with the dead. Many places around town have been the site of ghost investigations, including the Emily Morgan Hotel – the third most-haunted in the world, according to USA Today.

Formerly, the building was the Medical Arts Building, which had a morgue and a psychiatric ward.. The name originates from the famous story of a servant girl, Emily D. West, who wooed the Mexican General Santa Anna during the Battle of San Jacinto. Combining impressive architecture, a long history of tales from the Medical Arts Building, and the significance behind the name, The Emily Morgan Hotel is a landmark in the state of Texas. It was recognized by the National Register of Historic Places as part of the Alamo Plaza Historic District in 1977.

The boutique Emily Morgan Hotel is located right across from the Alamo, so you can imagine that there may be some spiritual influence. And there is! The ninth floor is said to be haunted by the spirits of wounded Alamo defenders. Guests have reported slamming doors and moving objects.

Other very haunted areas, besides the ninth floor, in the hotel are the seventh, eleventh, or twelfth floors.Here reports of other unexplained noises and the feeling of being touched are pretty frequent. USA Today recommends reserving a room on the 7th floors if guests want to welcome a ghostly visitor to their sleepover.

Where did you go?!

Where did you go?!

Hello =) I’m still here, and this blog will resurrect at some point. I’ve just… not quite been myself since my father died in May. I haven’t done anything witchy since talking to his ghost – haven’t done much of anything if I’m honest. I guess I’m just laying low for a bit, but I will come back eventually =)