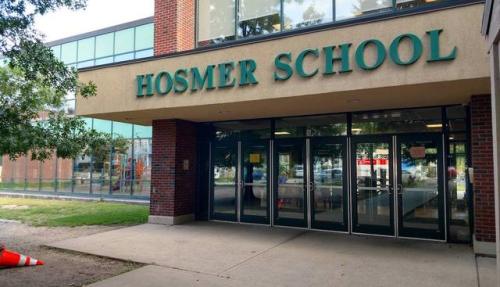 Hosmer #Elementary School in Watertown, #Massachusetts is said to be #haunted by the #spirit of a famous 19th century #artist and sculptor named Harriet Hosmer, who once lived in a home where the #school now stands. In the late 1800’s, the Hosmer Home and the surrounding land was donated to the town of #Watertown, and a schoolhouse was constructed. When Harriet Hosmer passed away in 1908, students and faculty members at the school began to report encountering her spirit wandering the hallways late at night, especially in the area near the auditorium.

The Bill Hader movie. This is a spoiler-free review (Above the Read More Line that hopefully doesn’t disappear)

2. How scary was it? It wasn’t super scary. Part of it was the Pennywise haunt sequences went on for too long, another part of it that some of the stuff was taken less seriously. I think the latter may be because it is about grownups facing childhood fears and looking through them at a now adult perspective and realizing while they still may be scary, it can also be a bit silly. 6.4/10

4. Is there blood and gore? There is a lot of blood.

6. Does that story make logical sense if you think about it too long? It’s a weird movie based on an even weirder book. Don’t ask yourself, “Why doesn’t Pennywise just kill them already?”

This is a giant movie. Part of that was to give it an epic feel as it weaves past and present together to tell one cohesive narrative about these characters. Another part of that came from really drawn out spooky sequences. They really could have trimmed some of those (though scene with Bill Hader is crucial to stay completely intact). It’s also very heartfelt, and you should find yourself really feeling for these characters (especially Bill Hader as Richie). It is a worthwhile reflection on how we can carry our childhood trauma’s throughout life and let them shape our adulthood.

Something that has been talked a lot about regarding this movie is the opening scene. It’s lifted straight from the text. While I do feel this movie could have gone without depicting a hate crime (It’s painful and I really wish they hadn’t), I do understand that it contextualizes Derry and how the town led to certain traumas some of the characters carried throughout their life. It may feel gratuitous though with the extent they took it to.

Man this is based on a weird book. While they go skim on some of the weird stuff, a lot of it is brought back in still weird ways. I never really thought It was ripe for an adaption, but I do think this team put together a really good one with plenty of heart and reasons to care. 7/10

“Thanks for showing up Stanley” Damn, that got me.

Richie impersonating Pennywise saying “Time to float” and laughing it off while saying “Remember he used to say that?” was amazing. Rewarding in a surreal way.

I was really hoping Richie and Eddie would at least kiss a bit before the end.

The casting was God damn insane. Older Stanley and Young Stanley are the same person from two different timelines.

I’m a bit mad about the girl with the birth mark dying. It would have been a nice little way for the man in the beginning who gave her the stuffed animal to live on.

Guys, please refrain from cute couple kissing as my man mourns the loss of the man he loved but was never brave enough to confess his love to. Please.

I honestly might buy fake glasses to look a little more like how Bill Hader looks in this movie.