What is Old Hag Syndrome?Victims of “Old Hag…

What is Old Hag Syndrome?Victims of “Old Hag… 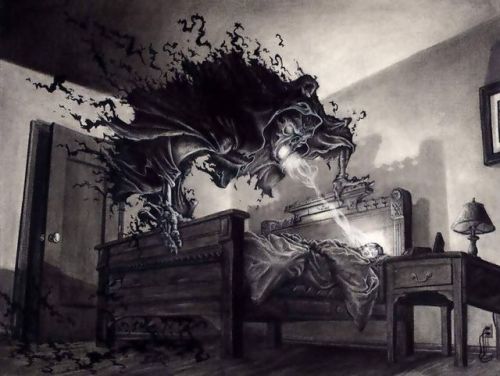 What is Old Hag Syndrome?

Victims of “Old Hag Syndrome” awake to find that they cannot move, even though they can see, hear, feel and smell. There is sometimes the feeling of a great weight on the chest and the sense that there is a sinister or evil presence in the room. And like the above reader, they are often quite frightened about what is happening to them.

The name of the phenomenon comes from the superstitious belief that a witch – or an old hag – sits or “rides” the chest of the victims, rendering them immobile. Although that explanation isn’t taken very seriously nowadays, the perplexing and often very frightening nature of the phenomenon leads many people to believe that there are supernatural forces at work – ghosts or demons.

The experience is so frightening because the victims, although paralyzed, seem to have full use of their senses. In fact, it is often accompanied by strange smells, the sound of approaching footsteps, apparitions of weird shadows or glowing eyes, and the oppressive weight on the chest, making breathing difficult if not impossible. All of the body’s senses are telling the victims that something real and unusual is happening to them.

Rather than ghosts or demons, however, there is probably a scientific explanation: “sleep paralysis” or SP (sometimes ISP for “isolated sleep paralysis”).

The #Northampton State #Hospital in Northampton, #Massachusetts was constructed in 1856 to treat men and women suffering from a variety of #MentalIllnesses. It was initially designed to accommodate 200 patients, but by the late 1950’s had expanded to house over 2,300 mentally ill men and women, who were subjected to inhumane medical treatments and #deplorable living conditions. Patients were often left in solitary confinement for long periods, or otherwise neglected and abused by caretakers. In January of 1978, the Northampton District #Court issued a decree ordering the closure of Northampton State Hospital, which took over 15 years to complete. The #asylum was finally closed in 1993 after treating over 64,000 patients, and was added to the National Register of #Historic Places in July of 1994. It sat #abandoned for many years, and over time developed a reputation for being #haunted. #UrbanExplorers and those who dared to enter the old buildings during this time have reported encountering the #spirits of former mental patients and medical staff, as well as hearing the sounds of disembodied voices, whispers, footsteps, and screams. Others report witnessing heavy doors being slammed shut by an unseen entity, and objects moving by themselves or being thrown violently across the room. In the early 2000’s one of the buildings was sold to L3 Communications, which has offices in the building, and in 2006 the Northampton State Hospital’s main building was torn down and replaced with the Villages At Hospital Hill #Condominiums. Although most of the other buildings on the old hospital’s campus have been demolished, the buildings that now stand at the site of the old asylum are still believed by many to be haunted.

If you liked this post, please consider following GhostQuest on #Patreon, and be entered into our monthly prize #giveaway!!