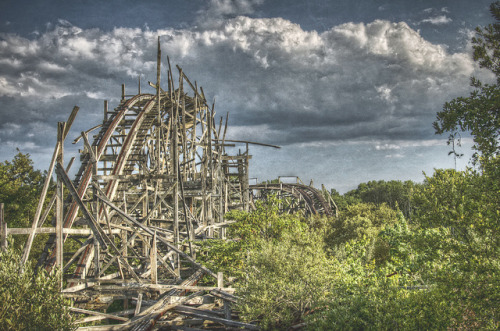 #​​Lincoln #Park #AmusementPark in Dartmouth, Massachusetts was constructed in 1894 as #Midway Park, which remained open for almost 100 years. It was permanently closed in December of 1987 after a series of safety concerns began to cause declining attendance. On August 17, 1986, a 27-year-old electrical worker named Michael Lynch was killed after falling from a #rollercoaster called #TheComet. The following year on September 29, 1987 the brake lines on The Comet failed, causing injuries to several passengers. #TheComet was immediately shut down, and the crashed passenger cars remained in the exact position they #crashed in until #LincolnPark was #demolished in July of 2012. #UrbanExplorers and #ParanormalInvestigators who visit the site of the former #amusement #park report witnessing the #spirit of a #man believed to be Michael Lynch, as well as the spirit of a former security #guard named Raymond Santos who was #shot and killed in March of 1982 ​by an intruder armed with a #stolen #shotgun. Others report hearing the disembodied sounds of laughter and #carnival #music playing, as well as smelling the scent of #CarnivalFood wafting on the breeze.

1. Supernatural or psychological or metaphorical in someway? Supernatural of course. While I’m a fan of cerebral horror as much as the next guy, there’s always something comforting about a horror movie that means absolutely nothing.

2. How scary was it? Pretty scary actually. There were some really good sequences, although maybe not as scary as Annabelle: Creation 7.4/10

4. Is there blood and gore? Just a touch of blood.

5. On a scale of 1 – 10 (10 being Alien: Covenant), how dumb were the characters? Well, well well, I think we may have found the dumbest character in the Conjuring Universe in Daniela. There are contenders in each and every movie but man oh man did this girl ever fuck up. She breaks into a do-not-enter-type room, fully believing in the paranormal, and touches literally everything there is to touch. She also lets a cake burn while on this dumb ass-capade. She’s more or less balanced out by the little girl Judy, who does some pretty clever things here and there. All in all, maybe about a 6.5/10

6. Does that story make logical sense if you think about it too long? I mean, maybe.

This is a kind of cute horror movie. It feels like a throwback with all the foggy haunted place imagery. It’s more or less what you come to expect from these movies, which I am definitely fine with because reliable horror is difficult to come by. They do keep their scares fresh and inventive and this movie is no exception. (There is one particularly lovely sequence involving the night light.)

Overall, this movie knows what it is. It doesn’t set the world on fire with its original storytelling (the story is pretty basic, even when compared with the other Conjuring movies), but it’s going to give you a happy two hours (ish). Compared to the other Annabelle movies, I’d say it’s superior to the first but I’d rate it slightly lower than Annabelle: Creation, which was darker, leaner, and meaner.

The Ferryman is gunning for that first spin-off.

I really was touched that Bob cared enough for the chicken to try to tell it stay in the coop.

Judy’s got dealing with ghosts down to a stop drop and roll.

Patrick Wilson is a warm presence.

That piano scene was good.

The way the shadow in the different lights grew was kind of Guillermo del Toro-esque. Fucking beautiful stuff.

I wish the Annabelle demon smiled more. I feel like it looked straight up creepier in the earlier two films.

Was that girl who said, “I’m looking for Annabelle” the daughter who died in Annabelle: Creation?

I feel like if I were in one of these movies, I would shout way quicker just so there would be more bodies between me and the demons. I would call the police even though they don’t deal with the supernatural, just so I’d be less alone.