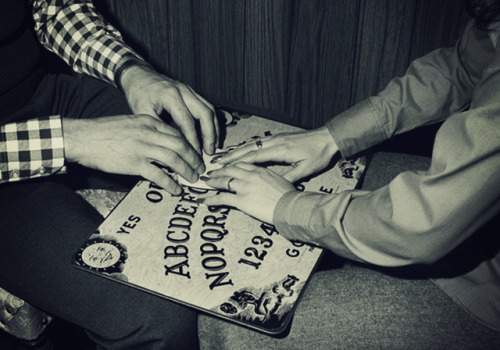 If your childhood was anything like ours, you have fond memories of summoning the dead at sleepovers with a mysterious item from Toys “R” Us. That item was the Ouija board, of course—and its peculiar history predates Hasbro’s lucrative trademark in 1991.

Advertisements for the Ouija board first popped up in 1891, declaring it “without doubt, the most interesting, remarkable and mysterious production of the nineteenth century.” For $1.50, you could purchase the Ouija board from a novelty store in Pittsburgh. With friends gathered, you’d place your fingertips on the planchette. A question was proposed, and you’d then wait for a phantom response—the planchette moving from letter to letter, seemingly of its own accord, answering your questions.

Spirit boards were already in use at the time of Ouija’s debut—spiritualism was in full swing and communication with the dead was a fixation of the Victorian era. Yet this was the first time such a device appeared on store shelves, and came with a name. It was a moniker the board gave itself, according to Elijah Bond, one of its first investors. So the story goes, Bond sat at the board with his sister-in-law, Helen Peters. When they asked what they should call it, the planchette glided about to spell “Ouija.” When Bond and Peters asked what such a phrase meant, the board replied “Good luck.”

And that was just the beginning of the Ouija board’s strange and spooky history.

1. The Ouija board secured its patent with a spooky stunt
Not only did the Ouija board name itself, it also ensured it would make it to store shelves with one eerie demonstration, according to the descendants of its founders. Bond knew he needed to prove that the board worked in order to get a patent—so he brought Peters along to a meeting with Washington’s chief patent officer. The officer’s name, as the tale goes, was unknown to either Bond or Peters. So they turned to the Ouija board for assistance. When the board correctly spelled out his name, the officer granted the patent.

2. One jury, armed with an Ouija board, finds the defendant guilty
“Who did it?” That was the question posed to the Ouija board in 1994 by four London jurors deliberating the fate of Stephen Young, a 35-year-old insurance broker on trial for murdering newlyweds Harry and Nicola Fuller. The board—and consequently the jurors—found Young guilty. When news of the late-night Ouija session broke, Young was granted a retrial. The retrial also ended in a guilty verdict.

The Ouija board told me to do it … at least, that’s the claim at the heart of numerous disturbing criminal cases. In 2001, former mayor of Minco, Oklahoma Brian Roach was stabbed to death in his sleep by his mother-in-law. The woman claimed her Ouija board told her that Roach was evil and needed to be killed.

In 2014, a man named Paul Carroll killed the family dog—he believed an evil spirit had entered the pet during a session with the Ouija board. A week after he pled guilty to the crime, his wife and stepdaughter decided to use the same Ouija board. They say the device told them they were going to die, which inspired them to set the house on fire.

4. The 12 Steps to Recovery.
Another famous fan of the talking board? Bill Wilson, the co-founder of Alcoholics Anonymous. Not only did Wilson have a special “spook room” in his home to communicate with spirits, he also claimed that he used the Ouija board to communicate with a 15th-century monk named Boniface. His communication with Boniface inspired the 12 steps of the AA program.

5. The creative process takes an eerie turn
Prog rock band The Mars Volta credits sessions with a spirit board for their fourth album, The Bedlam in Goliath. “When we first played the board, we found poetry attached to it. We hired two people to translate it because it was in Hebrew and in Latin and sometimes it was in what I think was Aramaic,” vocalist and lyricist Cedric Bixler-Zavala said in an interview. “One of those translators gave us back our money and didn’t want to talk to us or have anything to do with us again.”

Another translator was found to finish the job. “I just kept writing down everything that it said because it was 10 times more creative than anything I think I could have come up with,” Bixler-Zavala said. Yet it wasn’t long before the band felt the spirit with which they were communicating had placed a curse on the session. Their studio flooded, severe equipment issues plagued them, and tracks disappeared from the computer right before their eyes. In addition, the band’s drummer quit, and Bixler-Zavala injured his foot, requiring surgery. Eventually, band member Omar Rodríguez-López destroyed the board and buried it in a secret location.

Nevertheless, the ghost of the device lingered. Vinyl editions of The Bedlam in Goliath contain a mock-up of the band’s spirit board, while a digital version released on a flash drive came in the signature shape of the Ouija planchette.

fuckyeahnightmares:If the Scary Stories to Tell in the Dark movie is anything less than a…

fuckyeahnightmares:If the Scary Stories to Tell in the Dark movie is anything less than a…